Sanford Systems > All  > Technology  > The universe of AR & VR Applications 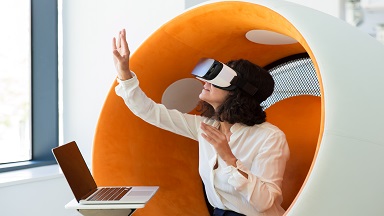 Now that there’s rapid growth in virtual reality (VR) and augmented reality (AR) , there is increased confusion about the differences between the technologies. While all are immersive technologies (technology that integrates virtual and real-world elements) and have similarities.

Virtual reality (VR) is an artificial, computer-generated simulation or recreation of a real life environment or situation. It immerses the user by making them feel like they are experiencing the simulated reality firsthand, primarily by stimulating their vision and hearing.

When a user puts on a head-mounted display or a VR headset, they sense—and their brains believe—they are moving among virtual objects on a screen. Most commonly, the headset is connected to a PC or console that enables the virtual experience. In the case of Google Cardboard, Samsung Gear VR and Google Daydream, it’s a smartphone that creates the virtual experience, while the Oculus Go can do it all because it’s a standalone VR headset.

VR is typically achieved by wearing a headset like Facebook’s Oculus equipped with the technology, and is used prominently in two different ways:

Virtual reality is possible through a coding language known as VRML (Virtual Reality Modeling Language) which can be used to create a series of images, and specify what types of interactions are possible for them.
Virtual reality tools already help surgeons plan surgery, individuals experience a travel destination even before they take flight, children learn in a simulated (but very real) walk on the moon and soldiers train for combat scenarios, but the future will be full of even more VR applications as businesses of all kinds figure out ways the technology can enhance operations.
Augmented Reality:
Augmented reality (AR) is a technology that layers computer-generated enhancements atop an existing reality in order to make it more meaningful through the ability to interact with it. AR is developed into apps and used on mobile devices to blend digital components into the real world in such a way that they enhance one another, but can also be told apart easily.
Augmented reality is useful for more than just entertainment. Retailer IKEA created an AR app that helps shoppers visualize what certain products will look like in their home before they purchase them. The app overlays virtual versions of the products onto the real-live image of customers’ living spaces. In addition to IKEA, companies in aviation, automotive, healthcare, travel and tourism, and more are developing augmented reality solutions. Augmented reality technology can enhance travelers’ experiences in many ways. Imagine being on a self-guided walking tour and wanting to know details about the architecture of a building you discover. With an augmented reality technology app, you could just point your phone at the building, and all the details are projected in your line of sight.
Thanks to tools such as ARKit by Apple and Google’s ARCore and because smartphones can support many AR experiences, more individuals outside of the tech industry are getting exposed to the AR experience.
AR technology is quickly coming into the mainstream. It is used to display score overlays on telecasted sports games and pop out 3D emails, photos or text messages on mobile devices. Leaders of the tech industry are also using AR to do amazing and revolutionary things with holograms and motion activated commands.
Virtual Reality and Augmented Reality Similarities:
Technology
Augmented and virtual realities both leverage some of the same types of technology, and they each exist to serve the user with an enhanced or enriched experience.
Entertainment
Both technologies enable experiences that are becoming more commonly expected and sought after for entertainment purposes. While in the past they seemed merely a figment of a science fiction imagination, new artificial worlds come to life under the user’s control, and deeper layers of interaction with the real world are also achievable. Leading tech moguls are investing and developing new adaptations, improvements, and releasing more and more products and apps that support these technologies for the increasingly savvy users.
Science and Medicine
Additionally, both virtual and augmented realities have great potential in changing the landscape of the medical field by making things such as remote surgeries a real possibility. These technologies been already been used to treat and heal psychological conditions such as Post Traumatic Stress Disorder (PTSD).
Augmented and Virtual Realities Differences:
Put simply, the difference between virtual and augmented is:
Virtual reality (VR): A fully immersive experience where a user leaves the real-world environment behind to enter a fully digital environment via VR headsets.
Augmented reality (AR): An experience where virtual objects are superimposed onto the real-world environment via smartphones, tablets, heads-up displays, or AR glasses.
Purpose:
Augmented reality enhances experiences by adding virtual components such as digital images, graphics, or sensations as a new layer of interaction with the real world. Contrastingly, virtual reality creates its own reality that is completely computer generated and driven.
Delivery Method:
Virtual Reality is usually delivered to the user through a head-mounted, or hand-held controller. This equipment connects people to the virtual reality, and allows them to control and navigate their actions in an environment meant to simulate the real world.
Augmented reality is being used more and more in mobile devices such as laptops, smart phones, and tablets to change how the real world and digital images, graphics intersect and interact.
How do they work together?
It is not always virtual reality vs. augmented reality– they do not always operate independently of one another, and in fact are often blended together to generate an even more immersing experience. For example, haptic feedback-which is the vibration and sensation added to interaction with graphics-is considered an augmentation. However, it is commonly used within a virtual reality setting in order to make the experience more lifelike though touch.
Virtual reality and augmented reality are great examples of experiences and interactions fueled by the desire to become immersed in a simulated land for entertainment and play, or to add a new dimension of interaction between digital devices and the real world. Alone or blended together, they are undoubtedly opening up worlds-both real and virtual alike.